END_OF_DOCUMENT_TOKEN_TO_BE_REPLACED

Emptiness. A bare, somewhat modernist room filled with nothingness. Cool, functional, lifeless. Two people, far apart. If there is a relationship, it’s one of power. The distance is palpable. In the middle of Jan Versweyveld’s stage, there is an old large engine hanging from the ceiling. It stutters then goes out. A young man enters the stage, wistfully playing the harmonica. He will get the engine started – in more than one way. Luchino Visconti’s debut film Ossessione is a tale of unbridled passion and its destructiveness. The juxtaposition of a cold, power-based marriage and the heat of an obsessive affair leads to disaster. There is no middle ground, no gray among the black and the white. In Ivo van Hove’s stage adaptation, the sweltering heat of the film is replaced by a chilling coolness. Spaces are wide, distances large, bodies tense. When Gino, the young drifter, and Hanna, the oppressed, wife finally get together, a suspended accordion is playing. The bodies dance a ballet of constricted, obsessive passion. The climax is signalled by long-held dissonant chord. Closeness is achieved, the distance overcome. Nothing is good.

END_OF_DOCUMENT_TOKEN_TO_BE_REPLACED 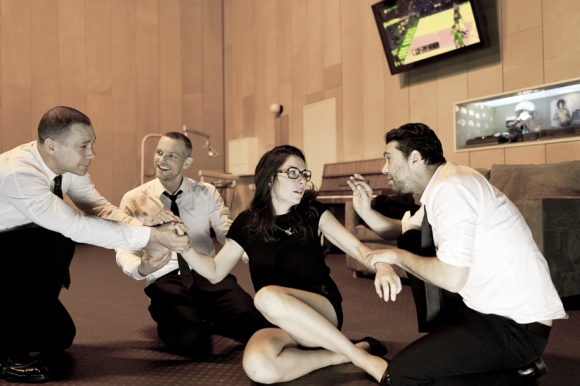