Eleven days have a rather annoying quality: they pass by rather quickly. Just now, it seems, you discussed the prospects of this year’s Berlinale, what kind of festival it would be, how high its quality – and already, it is time again to glance back at it as you enter the long, 12-month wait for its next edition. So, let’s do this in the fast, short, fleeting way the festival deserves. To put it shortly: it turned out to be a good one feature the strongest Competition in years and a fine and extremely diverse slate of entries in the other section. Strong women were supposed to be a major feature of the festival and they were – though their more impressive appearances were in the smaller, ordinary ones rather than the large heroine’s tales such as Isabel Coixet’s opening film or Werner Herzog’s artistic disaster Queen of the Desert, easily the Berlinale’s worst film this year. Oh yes, the big names: they tended to disappoint, such as Herzog, Terrence Malick, Wim Wenders (though this reviewer can only gather from hear-say). The Berlinale, however, is a festival of discoveries and this edition was no exception. A large number of first-time directors even in Competition impressed, some of the greatest and most insightful films came from countries such as Guatemala, Chile, Vietnam or Romania. The German film had a mixed year but at least Sebastian Schipper’s Victoria proved that German filmmakers occasionally dare experiment.

END_OF_DOCUMENT_TOKEN_TO_BE_REPLACED

Life and the universe in general, love, life, birth and death and everything in-between. No doubt, Terrence Malick doesn’t do it below this. When they work, his essay poems about the great existential questions are mesmerizing, test the limits of what film can do, convey a truth words alone can never carry. When they don’t, they become tedious, pretentious exercises by a film maker going through the motions. Unfortunately, his first Berlinale competition entry sind The Thin Red Line won the Golden Bear in 1999, decidedly belongs to the latter category. It might even be its first entry. „Where do I begin“, the disembodied voice of Christian Bale repeatedly asks. Wherever that might be, it never happens. The camera hovers as usual, mostly around Bale who, it seems from the few hints we get, is a not too successful screenwriter, going through various attempts at relationships, some remembered, some more imagined, deals with family baggage and doesn’t say much. What is clear is that he’s lost for any real direction in his life. Malick illustrates further by his usual juxtaposition of the individual against a vast, beautiful and autonomous universe, in this case mostly the beaches and mountains around Los Angeles. Except when he speaks the commentary that goes from voice to voice, character to character and talks of the pilgrimage that is life, fragments one tries to put together to get at a bigger picture that never emerges, speaks of a fear of living– all household ingredient of a kitchen sink kind of philosophy of life. The sound quickly moves into and even faster out of scenes, the musical score dominated by Vaughan Williams, Grieg and Debussy is ever-present, several narrative levels co-exist at the same time. However, the bigger picture never emerges. For  a very simple reason: Its component parts don’t mean anything. Those who appreciate Malick’s unique film making aren’t used to disappointments. They’d better brace themselves this time. 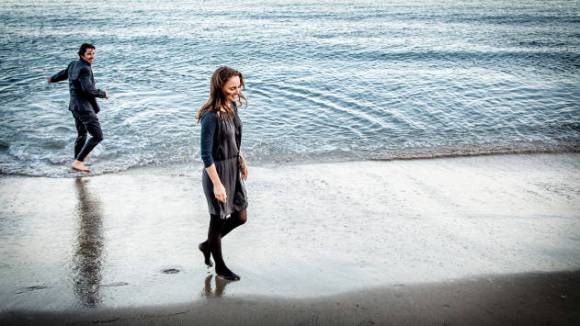 END_OF_DOCUMENT_TOKEN_TO_BE_REPLACED

Every once in a while, some might say hardly ever anymore, a film comes along that defies description, that cannot be explained in words, that opens the viewers eyes to what film can be, a film that regards the various forms of expression the medium employs, sound, imagery, music, narration, as equals, makes each of them a voice in telling the story and transcends the everyday way of seeing and hearing stories told we’re used to creating a new language that wholly belongs in film and cannot be adapted to any other art form. It is in these rare films that the art film can be comes into its own and stands equal to its (step?) siblings, music, painting or literature. Few film makers have managed to combines the various levels film can and should employ to create a polyphony that results in a language which is that of film and film only. Terrence Malick is one of those few directors and nowhere has he been so successful as in The Tree of Life,  a hymn to life, a meditation, too, a poem perhaps that creates it very own world and leaves the viewer dumbfounded. So rarely can film truly open eyes anymore, this film comes as a shock, a thunderstorm that leaves one shaken but strangely cleansed.