A three-hour film, formally and narratively challenging, featuring a 5-minute black screen opening and an „interlude“ almost as long: placing this into the Berlinale’s Generation section is a fairly bold move. No doubt: this film challenges the attention level not only of younger audiences. On one hand, a highly theoretical essay on the necessity and futility of revolutions, it centers on a small revolutionary, one might also say: terrorist cell in modern-day Montréal with objectives somewhere between the anti-capitalist and the nationalist. The film has the feeling of a collage: realism follows symbolism, news footage is combined with music-only sequences, there are multi-layered narrative overlaps, theoretical soundbites and text boards, more confusing than structuring title cards scattered throughout the film, time is fluid, no change ever explained. At the centre is the group’s „headquarters“, a darkened, nocturnal, clattered cave-like house, that’s living quarters, art space and lab all at once. Changing but always somewhat encapsulating frame formats heighten the sense of claustrophobia and of people losing any touch with reality – when they are forced into contact, the resulting scenes are the film’s rather bland and clichéd weak spots. For most of the time, this is a challenging, multi-faceted exploration of youthful rebellion, an examination of a society in paralysis, observed through the eyes of not very objective outsiders, a journey underground to society’s underbelly of lost ideals and the despair of a failing desire to change the world. A music-driven elegy, distant and close, a painting, human beings between isolation and a bond that supports and holds back. In long scenes the camera follows the characters around on their paths. Lonely, dark, uncertain. They lead nowhere, so at the very end when the everlasting barrage of theory and appeals stops, when light comes in, this spells a glimmer of hope. Hope for another way. For this has ended in a dead end. 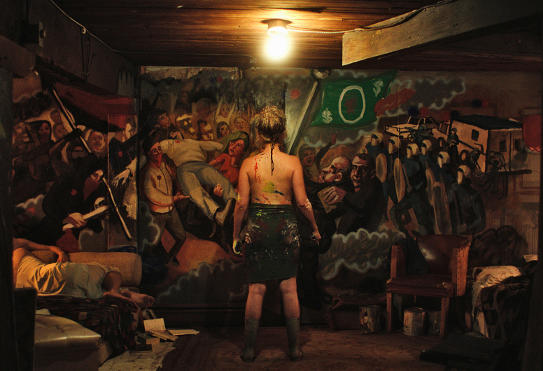