In the end, they catch him. Agter a spectacular chase into an underground station, the two cops arrest the robber they started following several blocks away. The scene leading to theis is a mixture of hughly crafted genre fare and its own parody. Of course, it’s fake, a heroic as well as humorous look at police clichés. The reality is different and director Alonso Ruizpalacios comes at it from many angles. First he has to cops tell their story, quite convincingly until it turns out they’re just actors who are then shown rehearsing their lines as well as infiltrating police academies and departments to learn about being a cop, reflecting on it in video diaries, before the real cops appear, those they played and whose falling out with their superiors they have just enacted. Una película de policías is an elaborate dance of fiction and reality, of clichés and stereotypes and real experiences. In under two packed hours, the systemic problems are made clear, the corruption, the neglect, the utter cynicism of the statement in which cops are victims and culprits at the same time. But also the idealism of many shows, there is no black and white in the blue. It’s a wild ride in which acting becomes a metaphor for police work, where it is involved, too, though, as an actor says, whereas he acts within fantasy, they do so within reality. The levels mix, become almost indistinguishable. What’s real, what’s fake? Whatever it is, it’s serious as hell. And deadly. In many different ways. 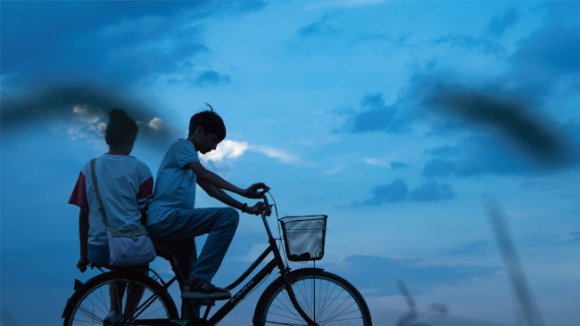 In the 1980s, when scaremongering about the detrimental effects of horror films was all the rage, Enid is working at the UK’s censor’s office tasked with evaluating, censoring and banning such films. She is portrayed as fanatically uptight, her suppressed rage and guilt clearly visible from the start in the stifling nocturnal paleness of her workplace. A film she watches triggers childhood trauma which sends her on her own downward spiral in the most genre-like way possible. The film joyfully plays with the genre’s visual palette while not interested in adding much to it. Sure, the ending is superficially ironic and even satirical but it feels like a willful addition to the fact that the film is mainly an opportunity to play with genre routines exposing a hypocrisy and political bias distracting from other issues that’s long been exposed. It fights a battle decided long ago or pretends to just to justify itself. If only ist were at least entertaining or in any way gripping but it isn’t. Exploiting violence against children and the long-term effects traumatic childhood experiences for its purpose doesn’t provide extra sympathy for this film whose inclusion in a prestigious festival such as the Berlinale is the only thing mysterious about it.

When a young African-American man inherits his grandmother’s house, he turns it into a collective, a communal place ruled by basic democracy and set to explore black culture and heritage. Enacted entirely in front of its walls painted in primary colours, we witness scenes of daily lives, readings, meetings, quarrels and activist talks. Thrown in are posters, old footage of black history, musical snippets, an insistant percussive backdrop. A mix of naturalism, community theatre and carefully constructed visual compositions, the film lingers between pamphlet and history lesson on one side (with a strong focus on African roots politics and theories) and somewhat artifical, sometimes wilfully amateurish enactment. The result is a rather strenuous and somewhat wardy, lifeless, non-static experimental set-up that enlightens but doesn’t engage. It provides a glimpse into current and past African-American political thinking, the struggle for identity and the confidence in not being quiet anymore but might have worked better without the thin, conflict-heavy, rather clichéd community life storyline including a very clumsy ending. As an exploration of inheritance, communal and private, it is little more than a rough sketch.

Cinema is revolution. With words to this effect, Juste un mouvement starts. Scenes from Jean-Luc Godar’s La Chinoise are extraposed with the film we’re watching and that is being watched in a cinema, too, as well as its creation. Both include Omar Diop, a young Marxist intellectual oart of the 1968 student movement in Paris and appearing as himself in Godard’s fil. He was later killed by Senegal’s post- and neo-colonial regime. The film merges the fictitious and the real, cinema and cinema, it talks to Omar’s family and friends and finds images for that new style of colonialism, China’s „soft power“ strategy, its infiltration of culture, sports (martial arts), life (language classes). It ends on a discussion about the value and dangers of this, its difference from colonialism, its similarity, and about re-inventing a culture, an identity buried by centuries of colonialism. Poems are recited, an indigenous theatre attempted, theory discussed. what enfolds is a fragmented panorama of a search for identity, a history of the liberating and stifling effect of leftist theory, and a reflection on the transforming power of cinema. The young Maoist appearing in La Chinoise and his memory, the memory of his many transformations ina new era of Chinese influence, are entertwined, become a spider-web of connections, departure routes for discourse, an open field of the search for an identity, a better way, true independence. The cinema appears as the place for such thought, such freedom, such possibility. This film is merely a starting point, a little confused and confusing, a little too wordy, a litlle to self-enamoured. A part of the search that cinema is and has always.

13-year-old Guo is a frown. It dominates her face for almost all of these just under 90 minutes. She is a ball of pent-up anger to which guilt is added early when her friend is drowned. In the blisteringly hot yet somehow also cold sommer – the sweat on the skin coontrasts with the iciness of a town in which everything seems to habve come to a standstill, first and foremost human emotions and relationships – Guo is stifled from many sides: the absent mother who breaks all promises and is sure to eventualy abandon her, her frustrated aunt, der jealous cousin, the boy who seems to like her but acts a little like a stalker. The camera is almost always on her face, often in close-up, relentless, almost like a stalker itself. Her intensity increases as the pressure does. There are no breaks here, everyone is emotionally too stifled to express sympathy, even those who harbour that feeling. Ebverything comes out wrong, so Guo is completely unequipped to deal with grief, anger, fear and guilt. she lashes out, as hostile as everyone else as she nears a turning point in growing up. She looks for an outlet in this blistering pale light that brings heat but no joy, no colour, no hope. There is a breaking point and perhaps an emotional door opening in the most tender of closing scenes, a moment of broken resistance, of closeness allowed. Where to go from here? There’s no saying but there is a chance that a path might appear.

This site uses Akismet to reduce spam. Learn how your comment data is processed.