Georg is a respected and feared music critic at a Vienna newspaper, filled with all the contempt and cynicism of Vienna intellectuals (think intellectuals anywhere and multiply by two, on a good day) when he loses his job due to the paper needing to save money. Robbed of the main source of his self.confidence, the middle-aged man hides the truth from his wife and embarks on a more and more bizarre revenge trip against his former boss which soon turns into a high-stakes – and high comedy – cat and mouse game as the victim soon suspects who’s behind the vandalism campaign. Meanwhile, Georg’s wife Johanna is going through a midlife crisis, Georg bumps into an old school bully who also loses his job, Johanna, a psychiatrist, develops a strange relationship with a gay patient who in turn is no stranger to Georg’s boss. Part revenge comedy, part satire about the difficulty to marry modern self-fulfilment requirements to healthy relationships, Wilde Maus is the brain child of Austrian author, actor and comedian Josef Hader whose biting and often quite dark humour is on full though somewhat moderate display here. What could have been a high-speed grotesque comedy is more of a witty, yet not to destructive conversation piece that relies more on comedic nuggets such as an insane chase in the snow involving an almost naked Hader, than on biting social comedy. Its speed is modest which serves the characters – apart from Hader, Pia Hierzegger’s frustrated wife and Georg Friedrich’s hilarious bully turned friend need mentioning – well. They are well-rounded creatures full of life yet bizarre enough to cause enough laughter. After all, the modern hamster wheel of self-fulfilment is bizarre in nature. As it is, Wilde Maus, is a well constructed though somewhat conventionally TV-style filmed entertaining feast of highly precise satire that could have been a little sharper. Only the harmless and unimaginative ending spoils the fun a little bit. 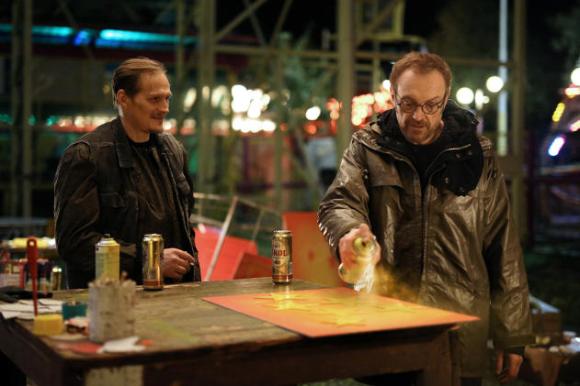 Paris, 1964. A young American writer sits for a portrait by the famed Swiss artist Alberto Giacometti. What is supposed to an afternoon turns into a multi-week affair as Giacometti starts, stops, undoes, starts again. The piece of art as something that is never finished is the film’s leitmotif and director Stanley Tucci drives it home relentlessly: in the artist’s incessant „Fucks“ whenever Giacometti hits another stumbling block, his perpetual remodelling of long-finished sculptures he passes and, of course, in his own words. The dialogue is always trying to drive home the message of a great artist being a sceptic, a mess of never-ending uncertainty whose happiness lies in being unhappy. Final Portrait is a cliché fest: in its dialogue that always serves an obvious purpose, the use of music (accordeon-heavy chansons for Paris, piano and strings for the artistic process), the artist as a restless philanderer (Giacometti’s love to a prostitute borders on the ridiculous), the lack of pragmatism and realism, the dishevelled appearance (contrasting with the clean-cut writer). Tucci’s film has fine acting (Geoffrey Rush masters Giacometti with the lightest of touches), a good rhythm, a carefully reduced colour scale modelled after Giacometti’s paintings and concise sense of direction and enough humour to keep the viewer going. The artist and man Giacometti, however, remain pale, the artistic process is more described than explore. A solid film with little ambition which leaves Final Portrait in a state Alberto Giacometti would have abhorred: mediocrity.

A stuffed, sweaty bar somewhere in Congo. Drink flows, bodies rub against each other. Music starts, a singer begins doing her magic. The rhythm becomes faster and faster, growing into a vortex of passion, desire, longing and lust for life. This is the beginning of Alain Gomis‘ Félicité. The title character’s face is the film’s anchor. A strong face, one that does not allow weakness. Part one is her search for money to pay for her injured son’s operation. She will not be refused, bounces back every time she’s rejected. As restless as she is are the handheld camera’s grainy close-ups. Then, the quest has succeeded and failed, a second film begins, a slow elegy in much quieter, less dynamic images. A tale of one, two, three lost souls whose voices are failing them. The energetic pulse of the Congolese music gives way to more sombre, classical tones (by Arvo Pärt). The camera moves to others: the big, pathetic, warm-hearted Tabu, the inert, desperate teenage son Samo. Slowly voices are found, the circle of loneliness broken if only for moments or for a glimmer of hope. Naturalism mixes with symbolism, sound itself becomes a major narrator. While possible a little too long, Félicité is an intriguing, deeply moving journey into a world where hardship is always existential but where mercy and compassion can be found among the cruel strive for survival. And it is a trip into the human soul, its strength, its weakness, its longing for community. When loneliness is abandoned, when the other is allowed, when smiles suddenly appear, strength isn’t given up, it’s multiplied.

Casting observes a film crew auditioning for a remake of Rainer Werner Fassbinder’s Die bitteren Tränen der Petra von Kant. Artistic ambitions clash with economic necessities and political schemings, egos and insecurities make the mixture even more explosive. Shot entirely indoors, Casting has an almost documentary feel. The key character is Gerwin, a stand-in with long-buried acting ambitions. Painstakingly precise is the way, the film observes the little mood twists and turns, the sudden closing-up and darkening of faces, the ease with which the thin veneer vanishes. Art and life interact in a thoroughly matter-of-fact way, existential drama hidden in the tiniest of glances and most passing of facial expressions or gestures. Dreams die, illusions fade between the lines as the boundaries between acting and realities blur. Where does truth end and the cult of „authenticity“ begin? Driven by incredible acting (Andreas Lust as Gerwin and Judith Engel as director Vera are particularly to be commended but the „actresses“ auditioning, among them Corinna Kirchhoff and Ursina Lardi, offer perhaps the most haunting insights into a business in which the pretence of truthfulness is a currency that pays your bills. Funny, sad, ironic and hauntingly moving, Casting is as devastating as entertaining a study on the infatigable art of film as can be imagined.

This site uses Akismet to reduce spam. Learn how your comment data is processed.